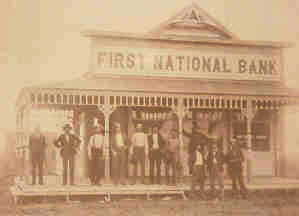 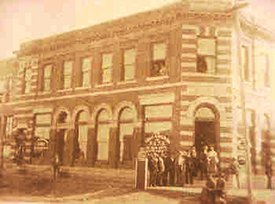 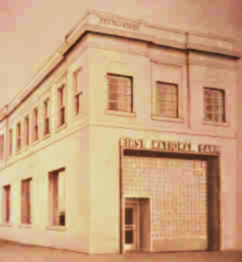 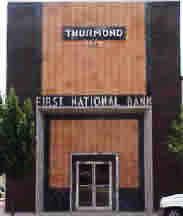 Since such meager beginnings, both Elk City and First National have grown in size and stature. Since 1901, descendants of the Thurmond Brothers have owned and managed the bank.

The bank has changed locations three times. The original bank location was one of the first buildings built in Elk City. In 1903 First National had outgrown its frame quarters and a beautiful new two-story brick building was constructed.

As many banks came and went throughout the first of the century, FNB stood strong and grew stronger. As FNB approached its fiftieth anniversary, it planned a complete remodel and renovation of its bank building. By this time FNB had been given the nickname as "Old Reliable" because no matter what was thrown its way it still stood strong.

Although later again remodeled, this bank building is still standing and operational as our downtown branch. In the 1980s, we moved into a newer and bigger building and better meet our customers' needs. Later, the bank acquired trust powers; changed its name to First National Bank & Trust, Elk City, Oklahoma; opened a branch in Sayre, Oklahoma; and purchased the Mike Neff Agency and later the Cooper West Agency to form the Western Oklahoma Insurance Agency, Inc., in order to expand our services.

Today, First National Bank & Trust is consistently recognized by independent bank rating agencies as one of the top banks in the country. It is the only local bank that started with Elk City and it is the only local bank that has been under the same ownership and management since 1901. From its meager beginnings in 1901, the bank has grown to over $326,000,000 in total assets and over $34,000,000 in capital.